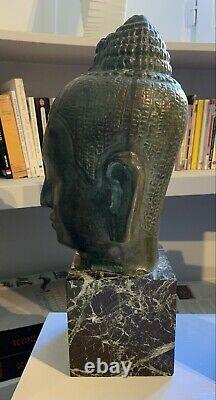 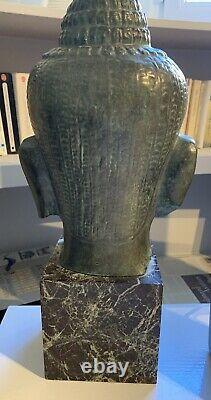 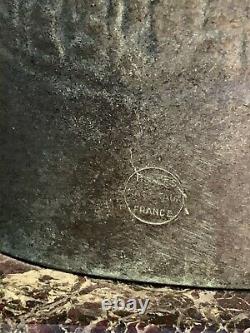 Bronze bust molded after a copy of the museum and then melted in bronze. Rare model dating back to the 1930s. During the early centuries of our Common Era, the cambodia was under the influence of India, and the Indians regularly retreated upon it whenever the gang valley was invaded or threatened. So the official religion is Brahmanism.

The country then fell under the domination of the people of Java, but from the beginning of the nineteenth century, the Khmer regained it as a whole and chose itself as capital, but a little later, the site of angkor. Despite the troubles and wars they wage against their neighbours, notably the camels, they know how to bring architecture and civilization to an exceptional level, especially during the first half of the xie century, during which the great temple of angkor vat, which marks the culmination of classical Khmer art, was built. But soon after, the camels resumed their attacks, even taken by surprise of the capital and set it on fire (1177). As early as 1181, however, Jayavarman vii managed to drive out the invader, was crowned king and undertook the reconstruction of the capital, whose main monument is the temple of the bayon, in the city of angkor thom. During this reign there was a certain break with the previous period: Brahmanism was abandoned for Buddhism, which led to notable changes in the plan of religious buildings, while the decoration was more exuberant and the motifs were directly inspired by reality, as it appeared in this head with the cunning expression: his smile a little cramped and his eyes open but a little fixed had nothing stereotyped and were far removed from those contemporary heads that smiled calmly.

#bronze #fonderie #asie #moulding #artsdecos. This item is in the category "art, antiques\art of xxe, contemporary\sculptures, statues".Arthu" and is located in this country: en.

This item can be shipped to the following country: European Union.